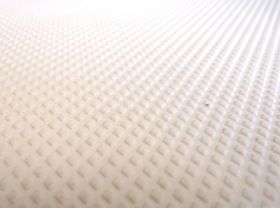 In addition to the qualities and characteristics shared by standard King Starboard, King Starboard AS (Anti-Skid) offers an excellent skid-resistant solution for ladder treads, shower and cockpit grates, swim platforms and any deck location where non-skid footing is a critical concern. Starboard AS has a grippy pattern on one side that's molded--not laminated--right into the polymer sheet, and will last the lifetime of your boat.

As a marine-grade polymer, King Starboard AS (Anti Skid) will stand up to salt water and sun a lot better than most types of wood--without a lick of maintenance, and often at lower cost. And like all King Starboard, AS won't rot or absorb water

What it can do. You can work King Starboard with standard woodworking tools and assemble components with standard screws and fasteners. I'm sold on this material as a faster, longer lasting, economical alternative to marine wood products in many situations.

What it can't do. You won't be using King Starboard to build boat hulls, because it's not a structural material. That means it needs to be supported by a load-bearing frame or substrate. You also won't be using King Starboard where temperatures are likely to exceed--or even get close to--180 degrees Fahrenheit, because it'll start to melt and you'll have all sorts of problems. And King Starboard expands and contracts with normal temperature variations, so you'll need to allow for that when you assemble various components.